Heating and cooling buildings (excluding electric heating) usually involves a fluid (liquid or gas) flowing through ducts or piping. Understanding fluid movement in HVAC systems is part II of our series, HVAC Overview. Roof Top Units (RTUs) and Air Handling Units (AHUs) are examples of Heating, Ventilating and Air Conditioning equipment (HVAC systems) which employ heat exchangers to transfer energy from one fluid into another, thereby either heating or cooling air streams. These two pieces of equipment are integral to many building HVAC systems

RTUs move air through different stages – pre-heat/cool, humidify/dehumidify/reheat – to condition the air to the requirements of the space served. Typically, RTUs utilize either a direct expansion (DX) refrigeration system or chilled water flowing through a coil for cooling, and a gas or electric based system for heating.

Here's how this manufacturer went from a steam generator with heat exchanger to an upgraded, outside air heating system: 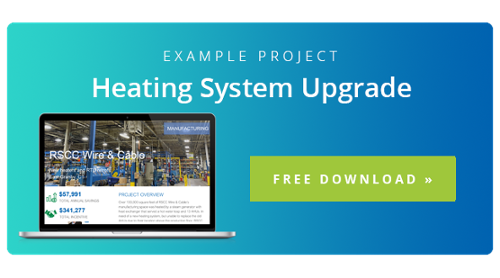 Efficiency gains can be achieved with RTUs in several ways:

Economizer cooling consists of admitting more outside air and exhausting more return air when outside air temperature is sufficiently low (65o F and less) and there is a requirement for cooling in the space.

Demand Control Ventilation is an efficiency strategy that reduces outside air when there are fewer occupants in the conditioned space.

Discharge temperature reset is a control strategy that resets the RTU discharge air temperature higher as space temperature and humidity conditions are satisfied.

The difference between Air Handling Units (AHUs) and rooftop units

AHUs operate in a similar fashion to RTUs, except an air handler is not located on the roof. AHUs are located throughout the building - above the drop ceiling, within a mechanical room on any given floor or in a basement mechanical area. Generally, the air handlers we work with are large units which can take up a large portion of a mechanical room.

All the efficiency measures discussed above for RTUs are applicable for AHUs as well.

A recent trend with large air handlers is the replacement of the centrifugal supply/exhaust fans with fan arrays. Fan arrays consist of multiple, high efficiency direct-drive centrifugal plenum fans in a wall arrangement. The fan speeds are varied in response to space conditions using either a VFD or ECM fan motors.

Multiple fans also provide redundancy and protection from a single point of failure. If the original central centrifugal fan fails, the air handler can’t operate. If a fan in the array fails, the other fans can run at higher speeds to maintain the setpoint.

RTUs and AHUs are the equipment central to the movement of water and air in many buildings to heat, cool and ventilate the building space. They are pivotal to a facility’s energy strategy because of the high energy consumption required to perform this work.

RTUs and AHUs are often contenders for mechanical retrofit projects because of the available savings and operational improvements through multiple efficiency strategies.

It’s simple: ensuring the efficient movement of air and water used for heating and cooling a space is core to the overall performance of HVAC systems, no matter the configuration. 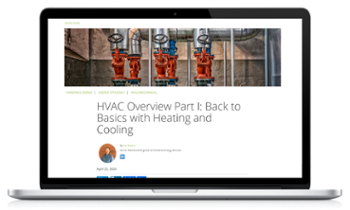 HVAC Overview Part I: Back to Basics with Heating and Cooling

Get a no-cost energy analysis